‘I always slept with one eye open as I felt very vulnerable for the first time in my life.’

I am originally from Braintree where I lived with my wife. We hit a bad period when we both lost our mums within 4 months of each other and this created a downward spiral for our relationship and life in general – we pretty much both lost the plot.

In 2007 she kicked me out and I ended up in Chelmsford prison with a five year sentence for drug offences. From then on I was in and out of prison and it actually became like home.

It was at the point of coming out of prison and having nowhere to go I then became homeless.  Due to my prolonged drug use I no longer had contact with my family. They didn’t disown me but they were all dealing with their own issues and lives. I ended up living in the multi-storey car park near the Odeon in Chelmsford – where there were people on every floor. This was the first time I had ever felt vulnerable. I had to sleep with one eye open otherwise your stuff would be taken.

I knew this wasn’t the life for me and struggled to cope with sleeping on the streets. Being around people wasn’t good for me so I found myself somewhere else where I could be on my own but I knew I wasn’t going to be able to cope for long. I would go to sleep each night really hoping I wasn’t going to wake up the next day.

It was now 2019 and I was on probation. At a meeting with a new Probation Worker I was told about the Winter Project that CHESS ran. As I was now clean from drugs he made a call and managed to get me a bed every night for about a week. It was from there that I was then offered a room at the Night Shelter on New London Road in March 2020 and met my support Worker Jo.

From this point on things started to change for the better, with every step being closer to a normal life. Yes there are rules at CHESS, but these rules gave me stability and my life feel normal. I could not go back to a life on the streets and so I was determined to make permanent changes in my life for the better.

I took part in the fitness classes that CHESS offered, did some voluntary work and committed to my support meetings. I knew it would be one step at a time but I believe that if you want something enough then you can make it happen. I’ve been given an opportunity at a new life, even at this age of being fifty plus. I take it one day at a time otherwise it feels overwhelming but I am proud of how far I have come. It hasn’t been easy – it’s been over a year of hard work but I feel lucky.

In May 2021 I was offered my own flat with a small garden in an over 50’s area. CHESS helped me get hold of some furniture and I’m settled. I have reconnected with my family and they are now in my life again which is great.

When I think back, if that Probation Worker had not made that call and taken me along to the Winter Project and introduced me to CHESS – I really doubt I would still be here.

I would like to be able to do something that helps others that have gone through the same experiences as I have had. It will make me feel as though what I have been through was worthwhile and that my life has not been wasted. 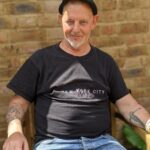