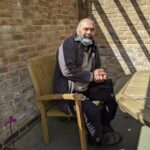 ‘I see these people as angels in human form – I mostly found people to be very kind because I was always happy to sit and chat with them. Those acts of kindness have stayed with me.’

‘I moved here from Turkey in 1980 and had only planned to stay a short while. I met a girl and we ended up getting married, buying a house in Basildon and having 4 children. I got married very quickly (within 3 months of meeting my girlfriend) and it didn’t work out in the end.

I went back to Turkey and moved into a basement near my family but hardly ever came out for 3 years and my mental health suffered as a result. I came back to the UK as I wanted to keep contact with my kids.

In 2018 I lived with my daughter but because of my mental health it didn’t work out. The relationship broke down and she asked me to leave. I then spent 3 months in a hospital psychiatric ward and was diagnosed with psychosis.’

‘After leaving hospital I spent 6 months sleeping on the streets in London which was tough. I tried to get help from various places (at the Mosque, other charities) but no-one would ever come back to me despite making promises. I found this soul destroying. I had to get out of London so moved to Basildon and managed to get a tent which I spent a further 6 months in. I remember 2 old ladies who lived nearby to where I stayed in my tent. They would always bring me flasks of tea and hot drinks and seemed to genuinely worry about me. There was also a guy who used to fish in the park – he once gave me a sleeping bag when the weather was very cold. I see these people as angels in human form – I mostly found people to be very kind because I was always happy to sit and chat with them. Those acts of kindness have stayed with me.’

‘Because of my mental health issues I was given some money by social services and used it to buy a car which I was then able to sleep in – that went on for about a year. To be honest I coped better mentally being on the streets on my own and not having the pressure of being told what to do. This was when my son referred me to CHESS.’

‘I came into CHESS and went into one of the move-on houses, had my own room and shared a kitchen and bathroom. I felt supported right from the start. CHESS was the first place that told me they would help me and actually did. My Support Worker David was always honest with me about what they could do for me and I trusted him. I was able to get extra help through Counselling sessions which really help me to deal with the stresses of everyday life and offer the extra support I need. I find that CHESS really cover all the details and have helped me to learn how to fit into society.’

‘I was happy to know that it was set up by Christian churches and could see love reflected in a practical way. After 3 months CHESS managed to get me into my own accommodation in supported housing for over 55’s which is very nice. Although it’s strange as on the streets I was never cold even when I didn’t have a tent, now I’m in a flat I feel the cold 😊.’

What are your hopes for the future?

‘I stayed 3 months in Kings Road but have now moved into my own accommodation in Writtle. As a homeless person you still have hopes and dreams. I would actually love to be able to earn enough money to be able to make a large donation to CHESS. As a muslim I think it is amazing that a Christian organisation has helped me and I want to be able to give back in some way. If I hadn’t found CHESS I would probably still be on the streets. I’m very grateful.’