‘Sleeping in my car was the hardest and worst thing I had to do and I was constantly scared of what might happen to me.’

‘I had always had a volatile relationship with my family, particularly my mum.  Coming from a Congolese family the expectation for a girl was to do well in school, possibly have a successful career then get married and have children. That’s when you earned respect from your family. Basically I was quite naughty – particularly throughout school and didn’t like to do as I was told.  This obviously caused problems at home.

I had always had jobs within the health care sector and had qualified as a Health Care Assistant.’

‘My story actually begins in jail in Germany where I was serving a 2-year sentence for fraud which was reduced to 18 months for good behaviour.  It was tough but whilst there I became fluent in German and ended up being given the job of a housemaid. I was 22 at the time of arrest. On coming out of prison I returned to London and everything was different. My relationship with the family had completely broken down but I met a guy who lived in Chelmsford and he asked me to move in with him. Even though I didn’t know him that well I saw this as a way out of the family situation and so I moved with him to Chelmsford.  Unfortunately this relationship did not work out and he asked me to leave. I ended up sofa surfing with cousins and friends and alternating this with sleeping in my car, but to be honest all my friends had their own issues to deal with so weren’t in a position to let me stay permanently.’

Sleeping in your car is the hardest and worst thing I had to do and I was constantly scared of what might happen to me. My friend would let me park outside her house just in case I needed help but it was such a horrible feeling. My mental health at this point was at its lowest. I could only cope with thinking ahead about an hour at a time. If I tried to think further than that it was overwhelming. My friend was actually the one who referred me to CHESS. She came along to the meeting with me and they had a room for me straight away within one of their properties.’

Can you describe what it was like to be classed as homeless?

‘Even though I now didn’t have to sofa surf or sleep in my car it was hard first of all living in a shared house. I still didn’t class myself as a homeless person and to be honest had too much pride to admit that I was the same as the people I lived with.

Once within CHESS I was allocated a Support Worker who became such an important part of my recovery. At first though things were not good – my new ‘home’ was just down the road from my ex, I was in conflict with my family and my dad had been diagnosed with cancer, I had tried to hold down a job but could not cope and I had no future that I could see. Up to that point I had not really considered the future but it was only when I stopped and took a moment that I truly understood how much of a mess my life was in.’

‘Things carried on like this for a while. I stuck to my meetings with my support worker, and even tried to work things through with a Counsellor that CHESS had provided but I wasn’t used to talking about my ‘stuff’. My mental health was starting to improve and when my ex wanted to try and reconcile I thought I was ready for a relationship again.  I soon saw that this was not going to work but the outcome of this trial reconciliation was that I became pregnant.’

‘So now not only was I living in homeless accommodation I was also pregnant. But funnily enough this was a turning point for me – I had someone to think of other than myself and had to look forwards to what the future held.”

‘I stayed about 20 months in Kings Road but moved into my own accommodation just before lockdown. My Support Worker helped me to sort out my benefits and other aspects of life that I had always found stressful. We worked towards getting a place of my own and within 20 months of being in CHESS I was given a flat where I could settle in the final stages of my pregnancy and get ready for the baby. A lovely couple had offered a bed to CHESS and even delivered it for me, they also got me a fridge freezer and have now become good friends that have helped me with other things.’

‘My baby is now just under 2 and the light of my life. She keeps me level-headed and I can handle the regular struggles of life as I have a responsibility to take care of myself and whatever the future has for us both. Since moving and having my child I have also gone on to pass my GCSE Maths and am working towards my GCSE English. As I worked within health care before I wanted to specialise in something so I paid for a Phlebotomy Course which I passed and now plan to pursue a career in that.’

‘Not everything is now easy, life’s struggles are still there but I have a home, a cupboard full of food and I am grateful every day for what I have come through. I have no shame about having been homeless and want my daughter to know that hard times can happen to anyone. I am so grateful to CHESS for what they did for me.’

What are your hopes for the future?’

‘I hope to have a stable career, stay settled and continue to grow a family. Family means everything to me and having one of my own would mean the world.’ 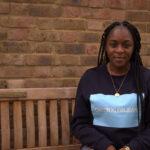