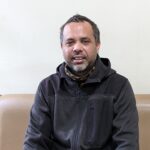 We first met Abdus at the police station when he had been locked out of his rental property with all his personal belongings still inside.

Abdus had lived in Chelmsford for 5 years and been renting a room for 3 years in a multi occupancy house. He always paid his rent on time and was a good tenant but came home one night to find the locks changed by the local council.  He found out that the property was actually unlicensed. He went to the police station but they were not able to do anything and told him to call CHESS. CHESS staff were able to make some calls and got his belongings back for him, and were also able to get him into a room in one of the CHESS houses within 3 days.  During those 3 days Abdu had to sleep in his van.

Abdus came to the UK from Bangladesh 22 years ago. He was the manager of a restaurant but once Covid hit the restaurant closed-down. Having always worked he decided to go into construction and electrics.

He came into CHESS and was with us for 8 months. Having no issues with drugs or alcohol we were able to get funding through Greater Change for Abdus to take an Electrician Course so he has more prospects for the future. He has since passed 2 of the 4 exams whilst doing a handyman role for a company, with the promise of a job at the end of the course once he completes his exams.

CHESS also helped Abdus with his budgeting and Housing paperwork for when he moved on into his own accommodation. There was also the offer of counselling if he wanted it to deal with other issues.

He did so well and showed his determination to secure a future by taking on the Electrician Course. Within 8 months we were able to secure Abdus a beautiful new flat, and provided furniture and other items through Essential Living Fund.

He said ‘Being made homeless after having a relatively stable like is very upsetting and scary and I am still living with the trauma of having to sleep in my van with the prospect of not knowing what to do. But CHESS is an amazing place. The people I met guided me to a real destination, helped me build a career and find somewhere to live. They treated me like a human being rather than like a dog.’